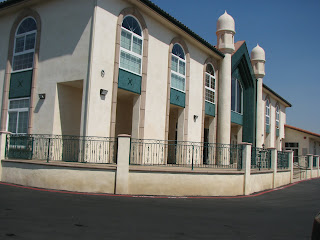 CHINO (Source: Daily Bulletin) The Baitul Hameed Mosque officially re-opened Saturday in a ceremony attended by many neighbors, religious leaders of other faiths, government official, the local police and fire department along with multiple media representatives.

The national head of the community, Dr. Ahsanullah Zafar, spoke briefly to the gathering via satellite saying, "we are Muslims who believe in the Messiah, Hazrat Mirza Ghulam Ahmad."

The keynote address was delivered by Imam Azhar Hanif, who had traveled from St. Louis for the occasion. Imam Hanif is a missionary of the Ahmadiyya Muslim Community and a national vice president of the group.

The event was telecast live to the World via MTAUSA.TV, a Web-based video streaming arm of the Ahmadiyya Muslim Communities in North America.

Imam Shamshad A Nasir of the Baitul Hameed Mosque delivered the concluding speech thanking and recognizing the many guests for their generosity during the long renovation process of the mosque.

"We have a record of service to the communities across the globe." said Imam Shamshad. "Here in this area, too, you know our community for our efforts in holding blood drives, food drives, highway cleanup and interfaith outreach, among many more."

Read the entire article
Posted by Sufyan Farooqi at 7:59 PM No comments:

Chino, CA (source: Press Enterprise) Ten members of the Chino Mosque went to downtown LA to distribute food to well over 250 people. The response from the crowd was that of thanks and gratitude. One Lady approached in a wheelchair and commented that this was her first meal in more than 48 hrs.

Mr. Khan, General Secretary of the LA East Chapter of the Ahmadiyya Muslim Community commented, "Members of the Mosque had a chance to reflect on the hunger in the world and in our own backyard. Mother Earth can produce more food than we need; it is our man-made systems that fail to administer this supply equitably or provide sustenance to all."

The Ahmadiyya Muslim Community is known for its services to humanity and and has built over 500 schools, and more than 30 hospitals The community has been at the forefront of disaster-relief efforts in the United States and in other parts of the world through an independent charitable organization, Humanity First (www.humanityfirst.org) .

Posted by Sufyan Farooqi at 8:04 PM No comments: