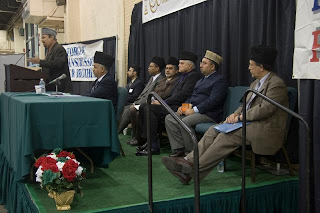 LOS ANGELES (Source: India Post): The Ahmadiyya Muslim Community has been holding its Annual Conventions, known as 'Jalsa Salana', in different parts of the world for over 100 years. This year marks the 24th Jalsa Salana West Coast, USA. Members from 11 chapters spanning from as far north as Seattle, Washington down through Oregon, California, Nevada, and Arizona will make the Journey to the Inland Empire, where for the first time in many years, the convention returns to the Baitul Hameed Mosque in Chino.

The event is set to begin on Friday, December 25 2009 and go on until Sunday, December 27, 2009.  Attendance is estimated to top 1000 this year, as members of the community from as far as Washington DC, Cleveland, Chicago, and even Canada are expected to attend.

Many of the community's national office holders will be in attendance including the National Vice Presidents of the Community, and the newly appointed Missionary In-charge USA, Mr. Naseem Mahdi. Mr. Mahdi will address the audience on Sunday spaking about the Holy Prophet Muhammad and his service to Humankind.

The purpose of the three day convention as laid out by the founder of the community, Hadhrat Mirza Ghulam Ahmad, is to enable every sincere individual to personally experience religious benefits and so that they may enhance their knowledge. Topics this year range on a vast number of issues including, Calling people to God and how to best convey the Message of Islam.

Women will also have their own session, in which dealing with today's recession will be addressed. The national president of the community's women's auxiliary, Dr. Shenaz Butt is also expected to address the gathering.