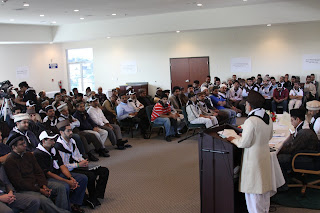 Chino- (Staff Writer) The Ahmadiyya Muslim Community (AMC) Men's Youth Association (MKA), USA successfully completed their 14th Annual Leadership Conference, which began on Friday with an informal barbecue at Laguna beach. Of the over 200 participants, a large majority were on the west coast for the first time. Many were amazed at the scenic views and were thrilled at the chance to enjoy a spectacular southern California sunset.

The formal event began early Saturday Morning with a Welcome from the local President of the LA-Inland Empire Chapter of AMC, Mr. Ansari who welcomed the young leaders. President of MKA USA, Dr. Yonus also addressed the group and informed participant about the objectives and goals of the conference. Imam Shamshad, Missionary at the Chino Mosque also welcomed the participants and said that he was delighted that they are having an event of this magnitude at the Baitul Hameed mosque. The session was then divided up into smaller groups and key leadership issues were discussed including finances, reporting, and how to motivate the youth within the organization, etc...

In the afternoon the National Executive Board of the Youth association put on a 'Resource Fair' which gave participants an opportunity to ask questions of their national counterparts and seek guidance from them, as to how to make there local chapters more active in specific areas including: how to hold successful education classes, organize blood drives, and how to successfully provide good spiritual education to the children of the community, etc.. The evening concluded with a meeting of the National executive board.

Sunday Morning the conference resumed and participants were inspired by two very respected early African American members of the community who touched the audience with their story of how they came into the fold of Ahmadiyyat and they offered the youth some valuable words of wisdom and encouragement.

The name "Majlis Khuddamul Ahmadiyya" is derived from its roots in Arabic. Translated into English, its literal meaning is "Group of the Servants of Ahmadiyya." Ahmadiyya (or Ahmadis) is the name given to those who are a part of the Ahmadiyya Muslim sect in Islam.

Members of the Ahmadiyya Community are Muslims that believe in the Messiah, Hadhrat Mirza Ghulam Ahmad (as) of Qadian, India. In 1889, the Promised Messiah (as), established this organization with a notion that "members of this community would show something distinctive in their day-to-day behaviors."