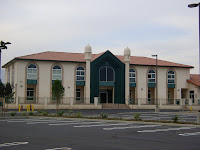 Source/Credit: The SB Sun | Writer: Neil Nisperos | Date: 8/14/2010
CHINO - A year of tragedy is underscoring the importance of the 2010 Ramadan observance for the Ahmadiyya Muslim community.

The Baitul Hameed Mosque community in Chino, which serves hundreds of Ahmadiyya Muslims in the Inland Empire, began the observance on Wednesday.

Ramadan, a month of daily fasting, offers Muslims all over the world the opportunity to strengthen and deepen their spirituality in order to be closer to God.

Prayers this month will be dedicated to the victims of Ahmadiyya persecution, Chino Muslim community members said.

Taliban extremists killed 86 Ahmadiyya Muslims this past May as they were worshipping at two of the group's mosques in Lahore, Pakistan. More than 100 were seriously injured.

"During the month of Ramadan, special prayers will be offered for those who were murdered, and for the more than 100 people who were seriously injured," said Imam Shamshad Nasir, who heads the Chino mosque. "Some of them are still in the hospital and some of them lost their limbs during this attack. We are praying for them and their families."

Ahmadiyya Muslims contend their founder - the 19thcentury Indian-born Muslim cleric Hazrat Mirza Ghulam Ahmad - to be the messiah mentioned in the Quran. Because the belief is considered heretical by larger Muslims sects, Ahmadiyya groups have been violently persecuted for their beliefs, particularly in Pakistan where the state officially considers them non-Muslims.

Mubarika Sadiq, president of the regional women's auxiliary group for the local Ahmadiyya community, said many Ahmadiyyas in the area have ties to people who were injured or killed in Lahore.

"Everybody knew somebody who passed away or was injured or was affected," Sadiq said. "It was sad this happened, especially because we believe that Islam means peace. Our (Ahmadiyya) motto is love for all and hatred for none, so it's really sad. But at the same time, we don't want to respond in that kind of way. When struck by such a thing, we believe that it is a time for patience."

In addition to the attack, many in the Ahmadiyya community here also know those suffering through devastating monsoon flooding in Pakistan this summer that has killed about 1,600 and impacted millions.

"The flooding is so painful," said Aisha Mateen, a member of the Chino mosque's women's auxiliary. "This is a tragedy, but in the month of Ramadhan, we're going to pray more for the families suffering, the people that were martyred and the families left behind. We're going to pray for them more and more so that God gives them courage."

Local Ahmadiyya Muslims have been busy collecting donations to aid flood victims and survivors of the Lahore attacks, but aid for the poor in the local region is also a priority.

As part of Ramadan, the women's auxiliary is holding a "Feed the Hungry" outreach project. Boxes to collect non-perishable food items will be placed at the Baitul Hameed Mosque on Aug. 20. The food will be given to the Foothill Family Shelter in Upland.

Ramadan, the ninth month of the Islamic lunar calendar, runs for 30 days to Sept. 9.