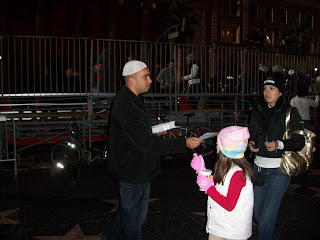 On Sunday, November 28th The Los Angeles chapters of the Ahmadiyya Muslim Youth Association distributed “Muslims for Peace” flyers on the streets of Hollywood as thousands of LA area locals sat curbside to watch the Annual Hollywood Christmas Parade.

The group of eight young men arrived several hours before the parade began and split up in pairs along Hollywood, Vine and Sunset Blvds., distributing over 1000 flyers. Many positive comments were received by the young men from flyer recipients. A majority of people receiving the one page full-color flyer thanked the young men for getting the positive message of Islam out to the public. “It’s great to see you guys out here!” said one parade attendee.
The “Muslims for Peace” flyers are part of a nation-wide campaign by the Ahmadiyya Muslim Community in the US to denounce terrorism and stand up for peace. The campaign has been a huge success in cities such as New York, where large ads on the sides of buses in downtown Manhattan have accompanied the distribution of the “Muslims For Peace” flyers by members of the Ahmadiyya Community.

Promoting peace and condemning Terrorism are the two main points of the campaign. The flyer also conveys in large print the motto of the World-wide Ahmadiyya Muslim Community: “Love for All -- Hatred for None.”
Imam Shamshad Nasir of the Baitul Hameed Mosque in Chino said, “The goal of this campaign is to convey the true teachings of Islam as taught by the Quran and the Prophet Muhammad.” The flyer also contains a quote from the teachings of Judaism – a quote which is also found in the Holy Quran in Chapter 5, verse 33, where it says, “If you kill one innocent person, it shall be as though you had killed all mankind. . .”

Imam Shamshad further stressed that, in light of acts of terrorism attributed to so-called Muslims, “Our job is even more important -- to get out the message of Peace and to educate our neighbors about the true teachings of Islam, which do not condone terrorism or the murder of innocent people at all. Our youth have taken a lead in this flyer distribution effort and they are to be commended highly for it. The change from violence to peace begins first on one’s heart, and then by our actions it is spread forth in the world.”